Orcas are truly the apex predator of the seas, with no natural enemies, not even sharks. They are powerful, graceful and highly intelligent. So it’s no wonder that seeing killer whales in the wild has become a bucket list experience for many. While there are numerous places for commercial whale watching from large power vessels, nothing matches the adventure of whale watching from a kayak in Johnstone Strait on Northern Vancouver Island.

Paddling a kayak, you are immersed in the whale’s environment at their level, right at the water’s edge. Your kayak glides silently, cutting the ocean surface. A pod of orcas rises; massive dorsal fins, sleek black bodies and bursts of mist from their blowholes. You are in their habitat, small and vulnerable. You feel a connection to nature you’ve never felt before and a break from the hustle and bustle of daily life. You watch in awe as they pass. Having shared such an experience you feel a bonding to your group, and shared memories that will last a lifetime. 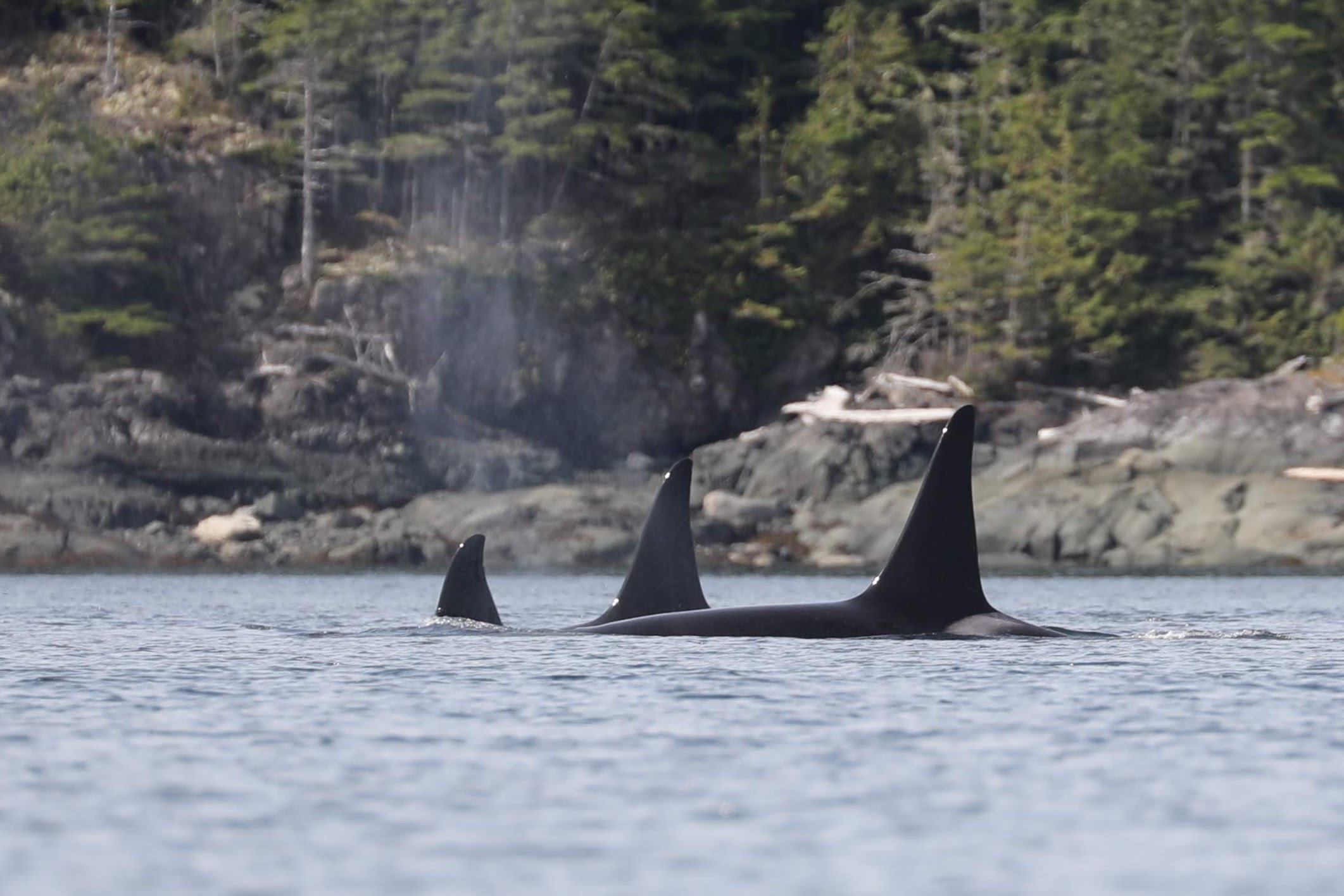 The Best Time of The Year to See Orcas

In the late summer months, the five major species of Pacific salmon, sockeye, pink, coho, chum and the orca’s favourite, chinook, migrate from the far reaches of the North Pacific to their ancestral rivers to spawn. From mid July till mid September, as the salmon travel through Johnstone Strait, Telegraph Cove and the Broughton Archipelago, they attract Northern Resident Killer Whales that hunt and feed on them.

There are about 300 Northern Resident Orcas. These whales are highly social animals and live in distinct family groups called matrilines or ‘pods’ which are made up of an elder female Killer Whale, her offspring, and her grandkids.These groups often consist of 10-25 orcas.

As they travel in search of food, the younger whales often are very energetic, breaching and spyhopping, standing out of the water vertically to look around. While the closest approach distance allowed for whale watching is 200m, at times the whales themselves decide to pass by close to groups of kayakers, inquisitive of or indifferent to these interlopers in their habitat.

Another type of killer whales occasionally seen here are the transient, or Bigg’s killer whales. These are a distinct group from the more commonly seen resident killer whales and their main food source is marine mammals such as seals, sea lions and porpoises. Although the residents and Biggs share the same coastal waters, they do not intermingle, compete or socialize with each other. Research suggests that residents and Biggs have been genetically separated for 750,000 years.

Johnstone Strait may be the best place in the world to sea kayak with orcas. The large population of resident killer whales means your chances are better here than anywhere else. While the area is remote, it’s easily accessible for those willing to make the journey. Whale watching close to Vancouver and Victoria is more exposed to open waters, not accessible by kayak, and often attracts a dozen or more whale watching boats at a time.

Johnstone Strait’s myriad uninhabited islands, secluded coves and nameless islets are a paddlers paradise, offering shelter and remote wilderness camping options. Kaikash Creek is a great kayak accessible campsite, located southeast of Telegraph Cove on Vancouver Island. Here orcas can often be spotted right from the beach. Hanson Island is also renowned for its many beaches and viewpoints to see orcas from. Sometimes orcas can be seen chasing salmon into the shallows and passing only meters from shore.

Several high current areas, such as Weynton Passage and Blackney Passage, are great places to sea kayak with killer whales. Fish tend to congregate in high current areas, as these currents bring in a food chain of nutrients and smaller creatures to feed on. And where salmon hang out, so do the orcas. However, the currents can run over 6 knots here, so the channels can be treacherous for novice kayakers and require expert knowledge.

There are also great spots for killer whale watching from shore at Bauza Cove, Blinkhorn Peninsula and even the boardwalk in Telegraph Cove.

The Robson Bight (Michael Bigg) Ecological Reserve, 20 kms southeast of Telegraph Cove, provides pods of orcas a place free from human disturbance. Each summer they come to this part of Johnstone Strait to rub themselves on the barnacle-encrusted rocks, pebbles and gravel seafloor. The marine portion of Robson Bight Ecological Reserve was established in 1982 in recognition of the importance of this place to killer whales and named after marine biologist, Michael Bigg, who spent decades studying them. An upland buffer zone was subsequently added to provide further protection for the whales, increasing the total reserve size to 5,460 hectares.

Although this ecological reserve is closed to the public, including kayaks, to reduce disturbance to the whales, there are viewing spots just outside the Bight, and from nearby beaches where you can often see orcas heading in for a rub.

A self propelled kayaking trip is a far more intimate and eco-friendly way to see the whales than on a commercial whale watching tour. Boat engines can interfere with the whales’ ability to use sonar to hunt for fish and boat propeller strikes have been known to occur.

In the Telegraph Cove and Johnstone Strait area, there are several options for kayaking with orcas. There are day trips, short overnight excursions and longer expedition-style tours. Some operators use ‘glamping’ style base camps, with amenities such as hot tubs and permanent dining structures.

But for those people wanting a more adventurous and authentic experience, nothing compares to a fully nomadic tour of Johnstone Strait. By practicing no-trace camping, you are leaving a far smaller carbon footprint and also able to move where the conditions and whale viewing are best.

For experienced paddlers, who want the most freedom, a self guided trip could be a good option. Telegraph Cove kayak rentals are available.

Safety When Kayaking with Killer Whales

There have been documented attacks by captive orcas on people, but never in the wild. A bigger safety concern is navigating the strong currents of the Johnstone Strait area, which requires skill and experience. At a minimum, kayakers should have emergency and first aid equipment. Knowing how to self-rescue, read tide and current tables and use a VHF marine radio is also a must. If not, a guided trip is the way to go.

The prevailing weather in the late summer is high pressure northwesterlies with fair skys but winds often build in the afternoon. However, low pressure systems producing southeasterlies can cause high winds and precipitation and often make it unsafe to kayak. Guided groups are usually able to safely navigate by experienced route planning and knowing local conditions. For independent paddlers, knowing when to stay off the water is an important skill.

Paddling in a Temperate Rainforest

Johnstone Strait is geographically located in a temperate rainforest, which averages almost 2m of annual rainfall, so proper expedition grade gear that can withstand the elements is key. Expedition kayaks will make paddling more enjoyable, and you’ll be less tired after a day out on the water. High quality camping equipment will keep you comfortable, warm and dry, even if it rains.

The rainforest here is painted countless shades of green. The Broughton Archipelago and Northern Vancouver Island often get shrouded in marine fog, so navigation can be tricky and requires local knowledge. Often the fog burns off by midmorning, and makes for surreal landscapes as wisps of mist shroud the rocky islets.

These lush forests of cedar and sitka spruce are home to bald eagles, black and grizzly bears, black-tailed deer and giant ravens. Each of these animals have cultural significance to the First Nations that thrived in this area for millenia. Like the orcas, they also relied on the salmon to thrive. 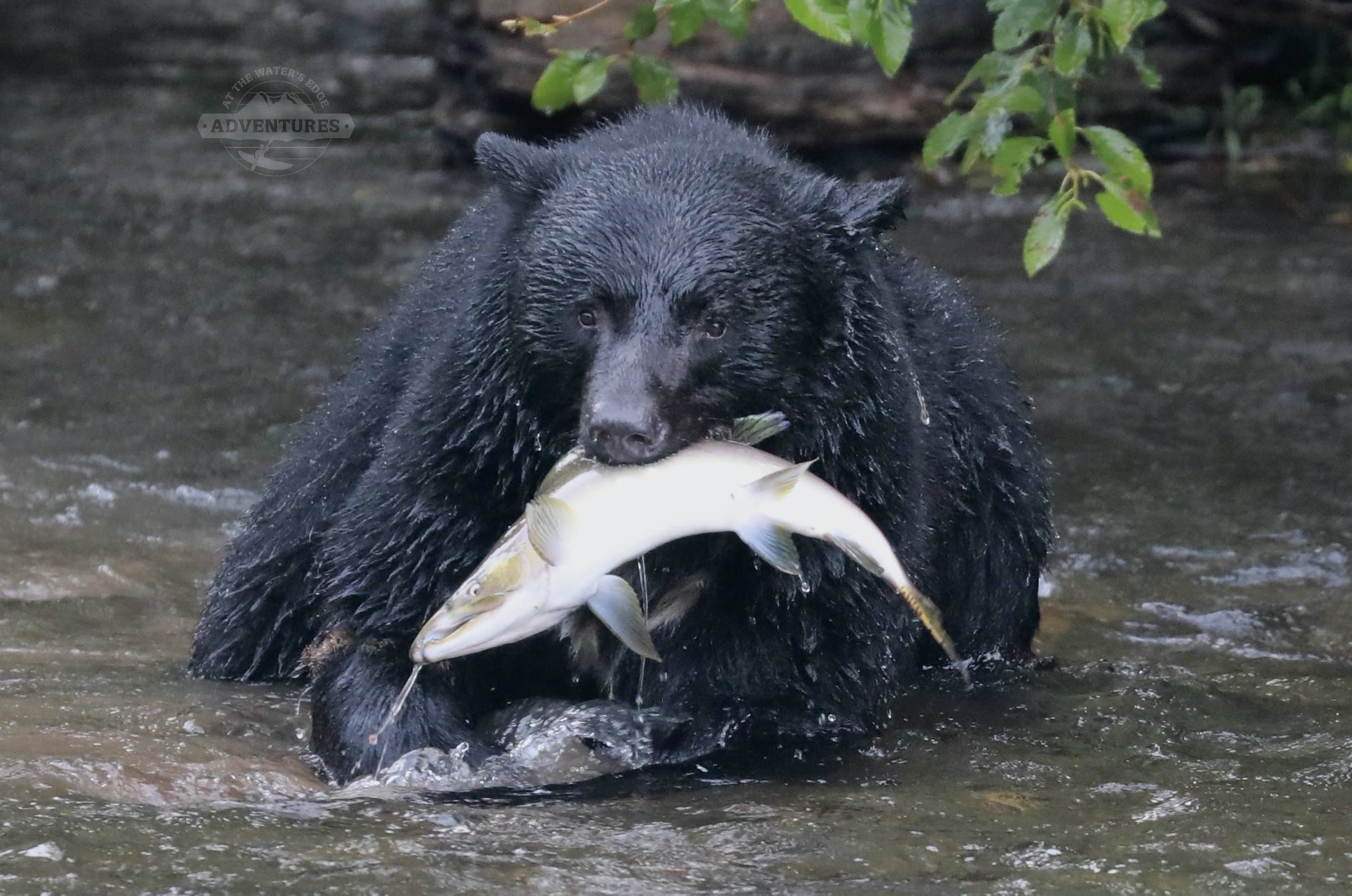 Identifying Orcas from a Kayak

Orcas are almost always recognized by their distinct dorsal fin, which can grow up to 2 meters in height in males. Male dorsal fins stand straight up with a straight back, like a triangle or cone while female orcas grow smaller, more curved dorsal fins that resemble a crescent moon.

Experienced guides can often identify orcas by the sound and frequency of their blow which is sharper and quicker than the humpback or minke whale blow.

A top draw for many paddlers is photographing orcas in the wild. While cell phones can be great for their size and ease of use, more serious photographers will want to bring a dSLR with telephoto lenses. Make sure to use a good strap or lanyard and a drybag to protect your camera.

As well as sharing your great photos on Instagram, consider helping researchers by reporting your sightings. 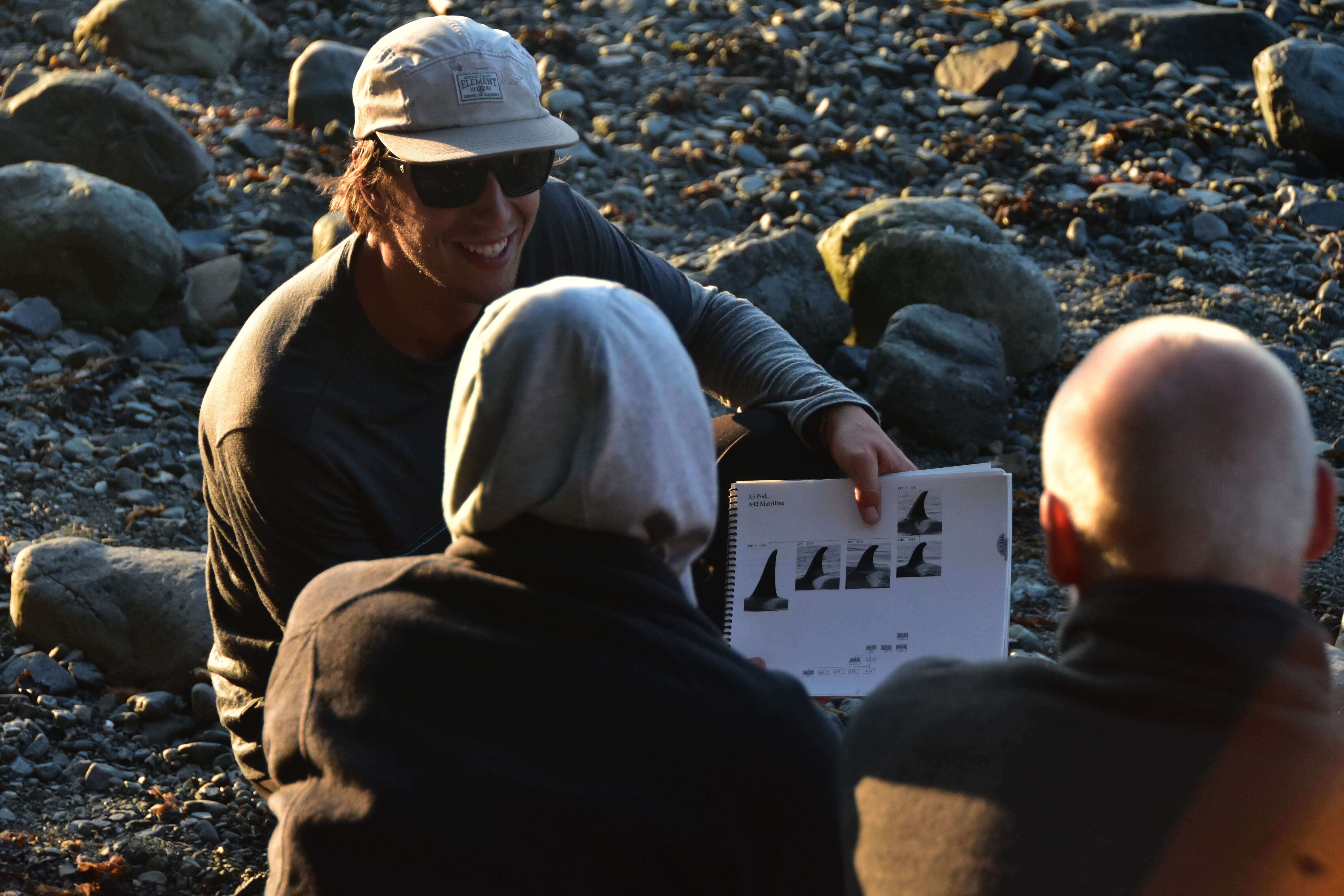 When it comes to planning a kayaking trip with orcas, it’s important to have the right expectations. If the salmon are there, so will be the orcas. But seeing them often comes down to luck, weather and being in the right place at the right time. The longer your trip, the better your chances will be.

This is a wild place. You are a visitor in the killer whale’s habitat, and sightings can never be guaranteed. So even if you don’t manage to see orcas, you will be paddling in a stunning area of natural beauty, the place the orcas call home. And if you do, you’ll remember the experience for a lifetime.