The Wildlife of Johnstone Strait

Johnstone Strait is a world-renowned destination to sea kayak with orcas. Nowhere else can you see these majestic mammals as closely or reliably. For many that make the trek to Telegraph Cove, for a kayaking tour on Vancouver Island, it has become a bucket list experience. But there’s a lot more to see here than killer whales. Johnstone Strait is Canada’s premier marine wildlife habitat and is home to creatures big and small. The biodiversity and chance for up-close wildlife encounters is exceptional on this rugged coastline. With countless islands, deserted beaches and remote fjords, it is a place to escape the modern world and experience nature unplugged. Spend a few days or a week or more and you will see many of these amazing creatures.

Humpback whales can usually be seen on a daily basis in the summer months. They are a migratory species that spend the summer feeding in the rich waters of Johnstone Strait and Blackfish Sound. Lucky paddlers may even see humpbacks bubble net feeding, where the whales work in unison, diving under a school of fish, and using their bubbles to encircle and raise the school to the surface. The humpbacks then rise out of the water, giant mouths agape, and scoop up their prey. To witness this from a kayak is awe-inspiring.

Humpbacks are around 15 meters in length and weigh up to 40 tons. Despite their giant girth, these bus-sized behemoths are also one of the most energetic of the big whale species, often tail slapping and breaching, where they jump clear out of the water, making splashes that can be seen from miles away. They are also known for their haunting whale songs, which are sung in the southern Pacific during mating season. The best way to see humpbacks from a kayak is simply to look for their blows, one of the tallest and densest of all whales.

A smaller and even more gregarious inhabitant of Johnstone Strait is the Pacific white-sided dolphin. This marine mammal is a relative newcomer to the BC Coast, only appearing in large numbers since the mid 1980’s. However, archeological evidence on ancient First Nations middens shows they were here in the past. Whatever the reason, we’re happy to have them back. It’s now estimated some 25,000 white-sided dolphins reside along the BC coast, typically travelling in packs of a dozen to several hundred or more. Like orcas, they also feed on the migrating salmon that pass through the region in the summer months. 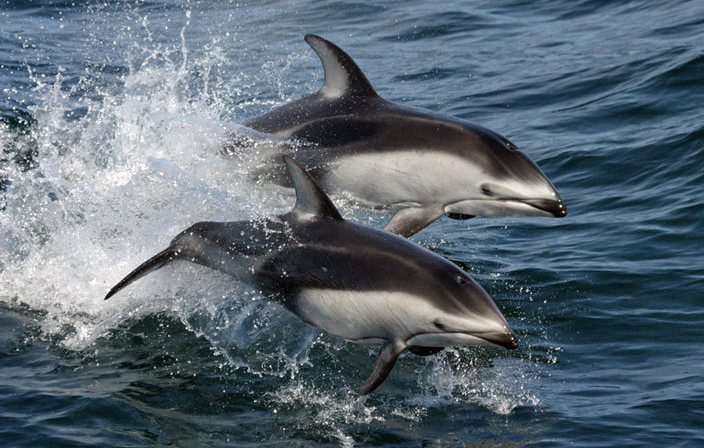 Pacific white-sided dolphins are named because of the white colouration on their sides and bellies. They are dark grey on top with a pale grey streak along each side and can reach up to 2.5m in length. They are inquisitive and often approach kayaks at close distances. It’s not uncommon to see them jumping out of the water and interacting with other marine mammals in the area. Kayaking with dolphins is possible throughout the Broughton Archipelago and many spots in Johnstone Strait. On a good day, Telegraph Cove offers excellent shore viewing. White-sides peacefully coexist with resident orcas, but are hunted by Biggs (mammal-eating/transient) orcas.

A smaller cousin of the white-sided dolphin is the Dall’s porpoise, which average under 2m in length and travel in small groups of less than ten. With a body shape and colours resembling a killer whale, they are often mistaken for baby orcas. They are also the fastest cetacean in our waters, travelling at speeds of up to 55 km/h. They are commonly seen in Johnstone Strait foraging amongst kelp beds and seeking out several species of fish. They are also hunted by Biggs killer whales. 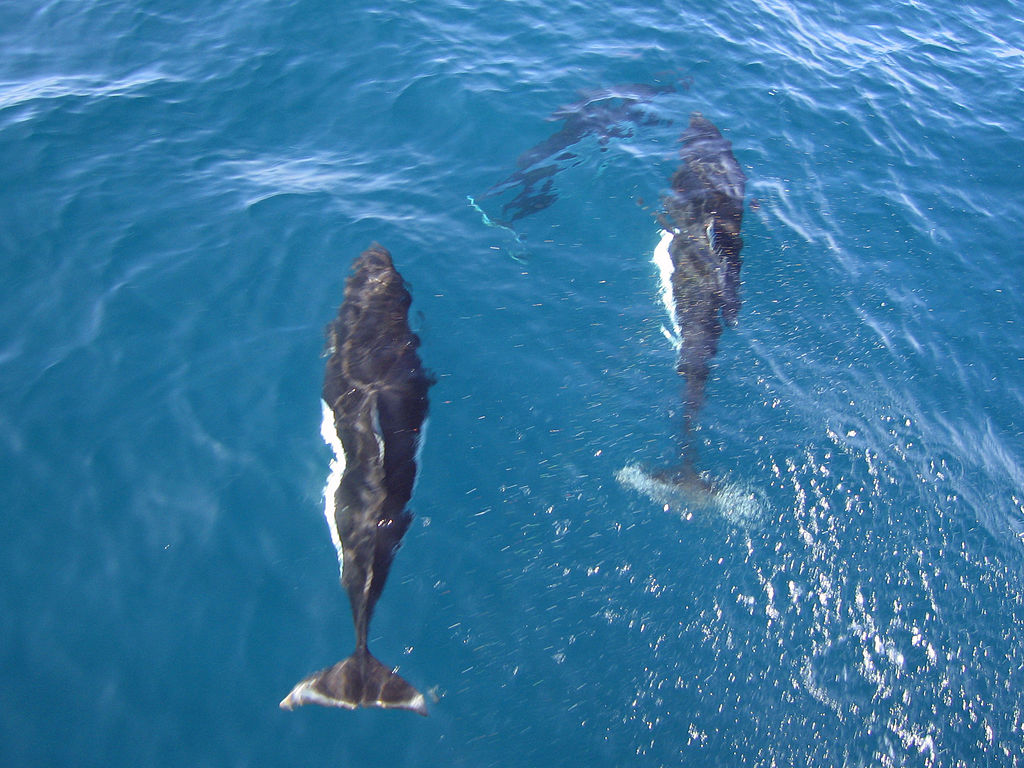 If humpbacks, orcas and white-sided dolphins are gregarious, and easily seen, minke whales are elusive. With a long, torpedo-shaped body, reaching up to 10m in length, they normally travel alone and avoid boats. They can slip below the surface without even making a splash. Their dark bodies make them hard to spot, and they are sometimes confused with killer whales, but their solitary nature and shorter dorsal fin easily distinguishes them from orcas. They are the smallest baleen whale in the North Pacific. The ‘blow’ of a minke whale is easily smelt if upwind of observers, earning this species the nickname ‘stinky minke’.

Another marine mammal seen by kayakers on Northern Vancouver Island is the sea lion. There are two species that inhabit Johnstone Strait: Steller and California sea lions. The Steller or northern sea lions are sometimes confused with California sea lions, but are much larger and lighter in colour and have a blunt face and a boxy, bear-like head. Males have a bulky build and a very thick neck with longer fur that resembles a lion’s mane, hence the name ‘sea lion. They may grow up to 3m in length and weigh over a ton.

California sea lions are known for their intelligence, playfulness, and noisy barking. Their colour ranges from chocolate brown in males to a lighter, golden brown in females. Males can reach 2m in length and weigh 400kg. They have a more ‘dog-like’ face than Stellers, and a male’s head often gets lighter in color with age. These animals have large flippers that they use to ‘walk’ on land. The trained seals in zoos and aquariums are usually California sea lions.

Sea lions are excellent divers and both species are commonly seen poking their heads up and looking around as kayakers pass by. There are many sea lion rookeries in Johnstone Strait where large groups can be seen basking in the sun. Paddling downwind of these haul-outs can be quite smelly. Be aware of approaching too close; if the sea lions rise up and begin to move towards the water, you are too close. Unfortunately, large males have been known to trample small pups, so never approach so closely you scare them into the water. 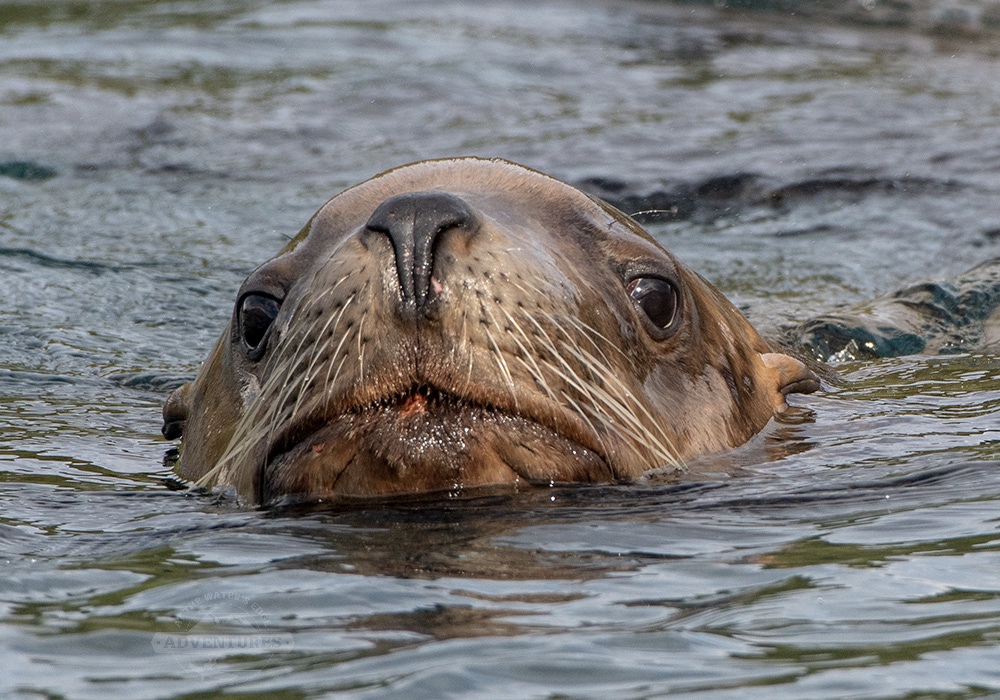 The true locals of Johnstone Strait, harbour seals are always around and are generally the most inquisitive mammal in the area. These playful pinnipeds will often approach kayakers at very close distances, popping up right beside you to see what you’re doing, only to disappear and pop up again somewhere else a moment later. Their healthy population, seen in every part of our waters, is a good indicator of a healthy ecosystem. However, they are also the only mammal that is known to have attacked kayakers in the Broughton Archipelago, so be aware if a seal is being ‘too friendly.’ 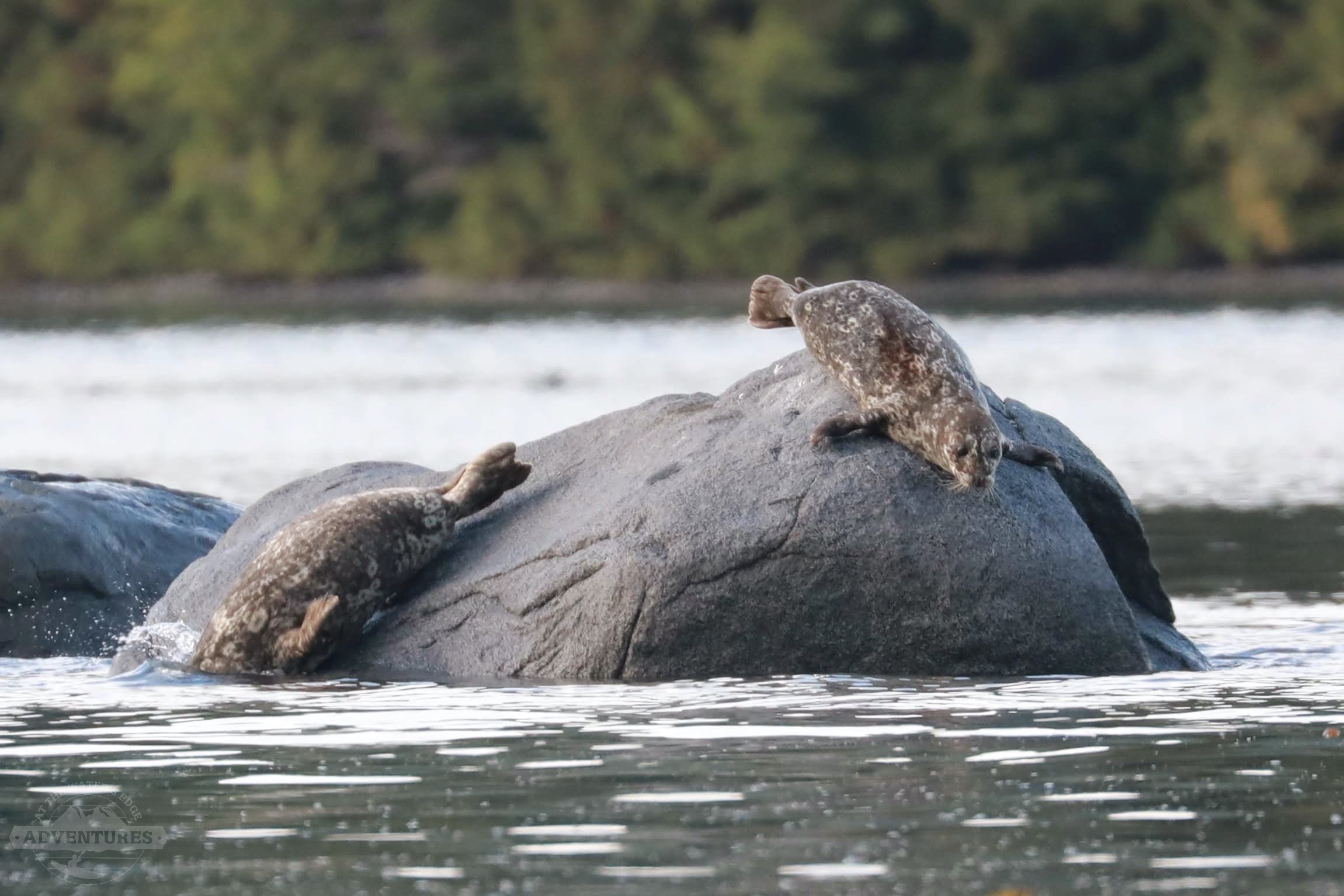 Do not approach or touch seal pups, which may be left alone on the shore while the mother hunts. If the mother smells or senses a human presence on the pup, she will often abandon the pup.

Above the water, many other impressive animals exist. Bald eagles are often seen perched on towering cedars as they scout for prey. In fact, BC boasts one of the largest populations of bald eagles in North America. The bald eagle is Canada’s  biggest bird of prey and can have a wingspan of over two meters. They are sought after by photographers and easily seen throughout Johnstone Strait, their white heads standing out as tiny dots against the dark green rainforest. These powerful birds were an important species for the coastal First Nations and a key part of their culture for millenia. 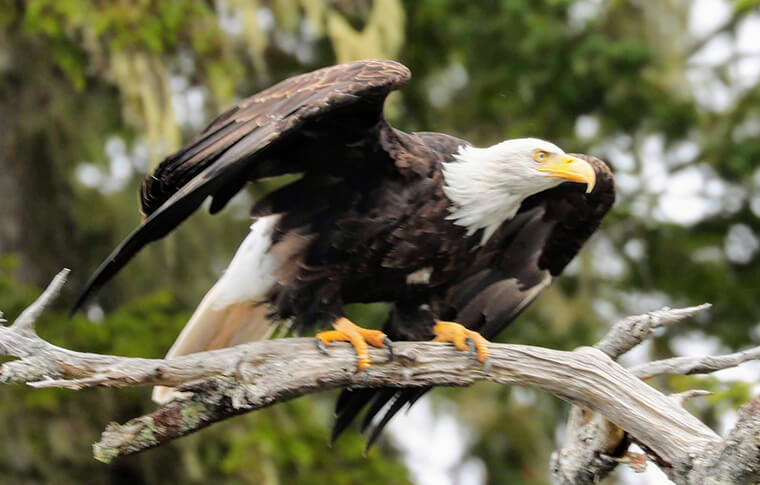 Johnstone Strait is located in the temperate rainforest which is home to a large bear population. Grizzly bears roam here and have been seen more frequently in the last few years, but are mostly found further up the inlets on the BC mainland. However, black bears are commonly seen on many of the islands of Johnstone Strait and throughout the Broughton Archipelago. The Vancouver Island black bear is slightly darker in colour and larger than the mainland bear and is considered one of six subspecies in British Columbia. 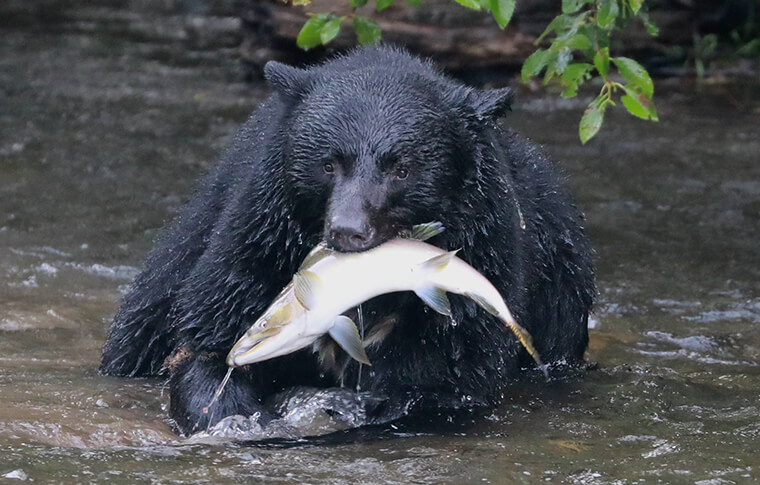 Bear viewing from a kayak offers a unique perspective. When paddling along the shoreline, always keep an eye out for black bears. They can often be seen foraging along the beaches, at low tide, looking for crabs and small crustaceans. Sometimes they may see you coming and retreat into the forest to watch you paddle past, so look in the undergrowth and you may see a bear staring back.

Bears are good swimmers and travel from island to island in search of food and to feed on the blacktail deer which also inhabit the islands here. For this reason, it is strongly recommended to use proper food storage techniques to help prevent problems that often end poorly for the bear. Kayak hatches or bear caches hung from trees are two of the most common tactics for storing food.

Kayakers will notice massive bull kelp beds throughout Johnstone Strait. They’ve been known to catch many a rudder. Numerous fish species, seabirds and sea otters congregate in these rich kelp forests. Sea lions and orcas can sometimes be seen feeding here too. These kelp forests are one of the wonders of the area and provide habitat for a vast amount of species.

Johnstone Strait is considered a world-class destination for scuba diving. The strong currents and proximity to the open ocean bring in a wealth of underwater marine life. These oxygen rich waters produce plankton, the foundation of an epic food chain, supporting every species along the way. 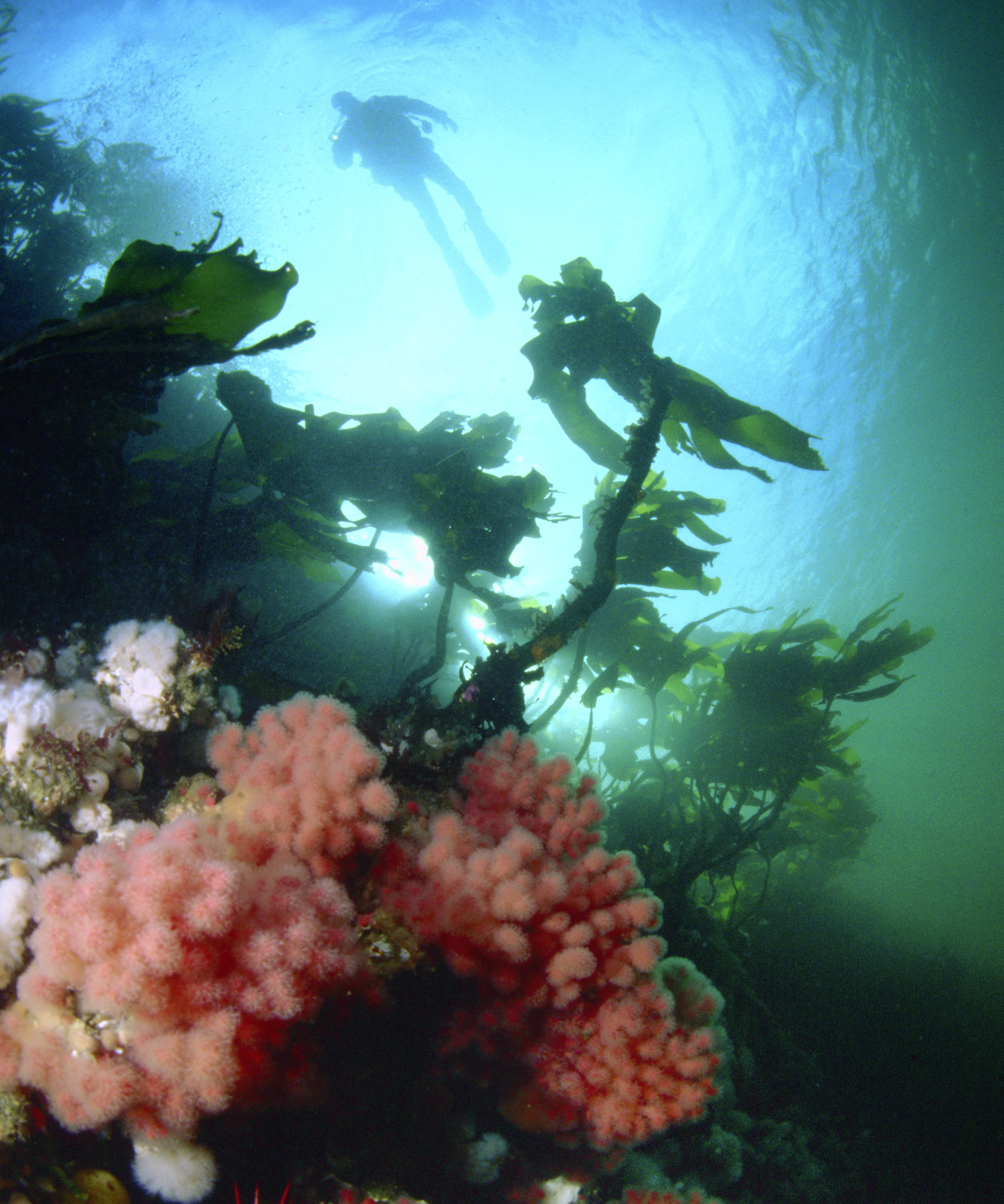 The tidal range in this area is over five meters, so low tide is a great time to explore the prolific invertebrate life. The Broughton Archipelago is known for its colourful anemones, giant sea stars and soft corals that can be seen in the many tide pools along the coastline. Paddle close to shore or explore the rocky beaches on foot at low tide.

Whether you decide to do a self-guided trip and rent kayaks in Telegraph Cove, or do a guided tour, the more time you spend in Johnstone Strait and the Broughton Archipelago, the more you’ll see. But you don’t have to paddle huge distances. Wildlife moves around and some days you will see more than others. Just spend time on the water, go slow and keep an eye out and you’ll experience this abundant marine habitat the way it was meant to be.